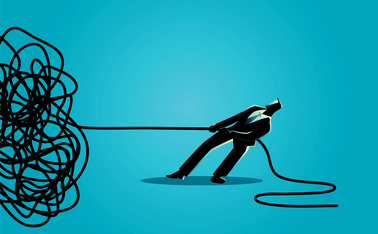 More often than not, when we write about an upcoming regulatory framework, the accompanying illustration is something along the lines of a set of strings twisted together, entangling everything they encounter on their path.

But in the case of the standardised approach to counterparty credit risk (SA–CCR), the images more likely to spring to mind would be a pair of scissors cutting those strings off, or someone untangling the mess.

The new framework replaces the existing counterparty credit risk methodology – the current exposure method (CEM) – and was finalised in 2014. It is already used in half a dozen countries, and will become mandatory in Europe and the US over the next two years.

Like the CEM, SA–CCR will be used to calculate inputs to a host of different capital calculations, including the leverage ratio. Under SA–CCR, cleared FX swaps could see significant capital savings compared with bilateral trades; LCH estimates a 50% reduction on a single trade.

Industry practitioners predict the switch will increase the amount of deliverable FX swaps and forwards being cleared, in a much-needed boost for the industry. Growth in the cleared space has stagnated over the past 12 months, as swaps and forwards are currently exempt from having to post variation and initial margin, while cleared trades require both.

But some banks believe that for the first time, there could actually be a capital incentive that overrides the funding costs that come with posting margin to a clearing house.

One head of collateral at a European bank believes the adoption of SA–CCR could be a “game changer” for FX swaps clearing, and says they are hoping to be ready to clear more if the leverage ratio savings turn out to be significant enough.

If clearing takes off, the approach has other benefits too. If interdealer clearing starts gathering speed, client clearing may not be far behind. Maintaining credit capacity is one of the biggest challenges buy-side FX swap users face, and clearing will give firms another avenue to add exposures without eating up their precious resources.

It could also smooth the way for other liquidity providers to enter the market, such as regional or non-banks, who have not been able to do so as they lack the ability to provide longer-dated credit to clients.

Given swap flows are heavily weighted towards a small number of big dealers, this could eventually kick off more competition in the market.

Economic Preview: This week we’ll learn the size of the hole the U.S. economy fell into when COVID-19 struck

Goldman signs up as NDF client clearer at LCH