It’s ‘no fun’ to be a small fund manager most of the time, Jan van Eck says — but right now is an exception 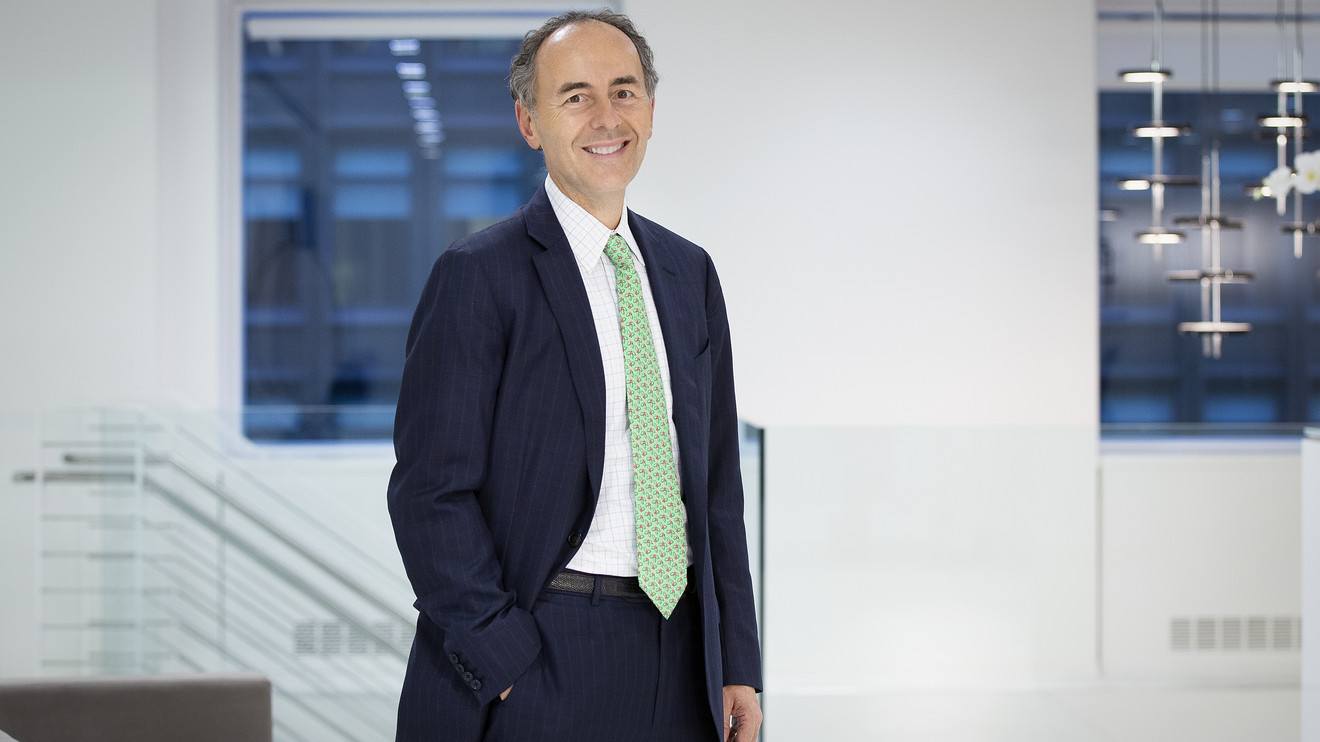 In the world of exchange-traded funds, the big keep getting bigger, not just drawing more of the investing pie but also making a mark on how the industry defines itself. Meanwhile, several funds with exposure to commodities have spent the past several weeks blowing up.

For all that, Jan van Eck, CEO of a small family firm founded several decades ago to offer investors access to commodities in a mutual-fund package, says he’s “quite happy” with the way things stand right now.

Van Eck likes the advantages of ETFs, he says, but “isn’t religious” about which types of funds may work best for investors. He’s deeply involved in product development within the company, but also focused on bigger issues, including serving on the board of directors of the National Committee on United States–China Relations. The company first had a presence in China since the 1990s.

See:U.S.-China relations are bad and getting worse, with major ramifications for trade and investment — and the U.S.’s presidential election

MarketWatch spoke with van Eck about the ETF ecosphere, what investors need to know about China, and how the Federal Reserve has managed the market shocks created by the coronavirus crisis. The interview that follows has been lightly edited for clarity.

MarketWatch: VanEck, the company, got its start offering investors access to gold in a mutual fund, but now you’ve got only a handful of mutual funds and a few dozen ETFs. What is it about ETFs that’s good for end investors?

Jan van Eck: We always think about the purpose of the fund in people’s portfolios. I actually sit with our active-portfolio managers, when we’re sitting in the office, and it takes up a bunch of my time. But I think the solution to active these days is you really have to have a concentrated, high-conviction portfolio that’s not just an “index plus.” I still believe in active, and I think for some areas, like probably sustainable investing, I think active actually has an advantage because you really need to get involved with the companies. I’m not religious one way or the other; it’s just that that’s really where our business has grown.

MarketWatch: What’s your take on the new active nontransparent funds?

Van Eck: Ah … you know, I don’t think that’s going to be a big thing. I think if you like an active strategy, as a U.S. investor, then for a taxable account, you’re happy to have that in an ETF because you get greater after-tax returns because of the tax advantages of the ETF wrapper. But I think the ETF ecosystem is in no way waiting for actively managed funds that they can’t see the underlying holdings of.

See:What is a ‘nontransparent’ ETF, and why would anyone want to own one?

MarketWatch: The other thing I’m really curious to get your take on is last week’s proposal by a bunch of industry heavyweights about sharpening up naming conventions. It was interpreted by a lot of folks as being heavy-handed, carving out as “normal” the more traditional approaches to investing that they are best known for and segregating off alternatives as “other.” What’s your take?

Van Eck: I really like what I understand to be the objective of it, which is to correctly communicate to investors the essence of the fund and the risks and rewards. In fact, that’s kind of one of our internal philosophical principles, that, when you’re talking to investors, don’t just give them the upside, also communicate what the downside is.

It’s really hard to know the future, and it’s really hard to know what’s going to blow up. The rules and the labeling doesn’t really get you there. Let me give you one example. People largely got access to commodities through commodities futures contracts like the United States Oil Fund USO, -3.60%. We knew that the shape of the futures curve is not something that any investor could see. But a lot of people brought these products to market saying, actually the curve gives you this advantage. When they first started, they basically said, you get an extra 4% annualized return basically because of the shape of the futures curve, and I’m like, yeah [laughing] until you don’t and it goes the other way.

So it cost us a bit because we couldn’t figure out a good way to come up with a commodity fund — which is silly because we had this gold background. In the last year of the commodities bull market, we finally came up with a mutual fund [the Constant Maturity Commodity Fund CMCAX, -0.27% ] that does a constant rolling of the contracts. That made sense, but it’s better not to do something that has that much of an embedded risk.

USO has blown up, but even in 2006 the difference between a commodities futures index and spot oil prices was 20%. So that potential risk was known. We also as a firm decided not to do leveraged products or inverse products for that very reason. There’s just no way you’re going to win the war of explaining to a client when you say, I’m giving you [three times] the return, and then you turn around and say, but we’re not going to give you that. That’s ridiculous.

Van Eck: 80% of the time it’s no fun not being one of the ETF giants. I do talk about concentration of the ETF industry and a lot of other industries as well. But that’s partly the result of technology and scale and a lower cost to the customer, so I can’t fight it. Our goal is just to try to survive what I see as an ongoing consolidation effort.

Having said that, I think now we’re in that 20% of the time where I’m actually happy to be a private firm. In this kind of turbulent environment we don’t have to worry about other kinds of nonsense — hiring freezes or whatever you might get in a larger organization. We can just keep on focusing on our growth plans. That’s a plus. Obviously having gold in our mix is a positive because our AUM — I’m sure it plummeted dramatically in March but has bounced back a little bit so that helps. We have enough resources and scale now to have a chance of surviving another decade.

(Editor’s note: As of May 21, the firm’s assets under management were $53.6 billion — about $1 billion more than at the beginning of the month of March.)

MarketWatch: I’m told you have a lot of views on China and the investment case around China right now.

Van Eck: I guess how I would say it is, you don’t have to like China, but, if you’re an investor at all, then you have to have a view on China. The U.S. and China are the two engines for the global economy. What I do in my quarterly investment outlooks is try to make sure that we’re not having a U.S.-only conversation about the world economy because I think markets are affected by what’s going on in China. The last time commodity prices fell was in 2015, and it wasn’t because the U.S. was in a recession; it was because China was in a quasi-recession.

See:No, China’s economy hasn’t gotten better, and the implications could be more serious than investors realize

The biggest policy move last year was certainly when the Fed started cutting rates. I think they did that because they were afraid of a hard landing in China, which was slowing down their economy dramatically, raising interest rates in China, and also hurting their financial markets. I kind of describe the world as: We and China are in a life raft. We can bring out the knives, but I think both of us, no matter how much we’ve sharpened the knife and want to stab the other person, we’ll just end up puncturing the life raft, and then we’re going to be in the sea with the sharks. That’s where we sit economically.

MarketWatch: With an election coming up, it seems like those knives are really coming out.

Van Eck: My base case is that there’s no huge policy change that would affect the markets relative to China. There’s going to be a lot of rhetoric, I’m keenly aware of that. I’m on the board of a nongovernmental organization that works with China. They set up the first ping-pong match in 1972, and Henry Kissinger is on it, too. So I try to pay attention. But at the same time that there’s a lot of political rhetoric, there’s also a lot of opening up of China’s economy right now, as per the trade deal, so we’ll just have to see. I don’t mean to minimize it: There is a risk. But whether it really drives the markets, I’m not so sure.

MarketWatch: You have an ETF ANGL, +0.51% that tracks “fallen angels,” which are bonds that were rated investment-grade at the time of issuance, but have since fallen into junk territory. Do you want to talk about the Fed getting into that corner of the market?

Van Eck: This is a low-cost distressed-debt fund, right? It’s the year of fallen angels. We’ll have the biggest influx of fallen angels probably in our careers. I think the fund is well-positioned. It’s a great contrarian buying strategy.

As far as the Fed’s policy, I’m against the Fed getting involved in the ETF markets. I don’t deny that they definitely helped liquidity of the markets, but I just think the ETF ecosystem is small, and it’s not necessary for them to use ETFs. In Europe, [central banks] did a lot of buying of instruments over the last decade, and they didn’t need to go to ETFs. I also think it’s an irreconcilable conflict for the biggest ETF firm to do the ETF buying. I don’t care how much sunlight there is on that process — it’s just sort of something you would not think would ever apply to another industry.

Read next:The Fed is going to buy ETFs. What does it mean?

Bank of Baroda to advance Rs 12,000 crore to MSMEs under govt scheme