Economic Preview: The economy can only start to recover from its coronavirus meltdown once it hits rock bottom. Are we there yet?

Investors will largely get a break this coming week from all the awful U.S. economic news before the Memorial Day holiday weekend, but not because things are getting better. They’re not.

Last week brought news of a record 16.4% plunge in retail sales, another 2.6 million layoffs, and a huge drop in inflation. Lower inflation is usually a good thing, but not in the current environment when businesses have to slash prices to stay alive and keep workers on the job.

Read:Jobless claims climb by another 2.6 million amid coronavirus shutdowns

Economic data due for publication in the upcoming week is sparse. On tap: A few million additional jobless claims or layoffs — unthinkable just a few months ago — and more evidence the housing market has taken a hit like every other major part of the U.S. economy.

The best that can be hoped for is the economy has finally hit rock bottom. A few scattered reports suggest it might be the case.

Surveys of small businesses and consumers, for example, appeared to stabilize in May. A flood of government aid to the tune of $3 trillion has had a lot to do with it. Washington is trying to keep businesses afloat and help tens of millions of suddenly unemployed workers weather the toughest time of their lives.

Most U.S. states, meanwhile, have started to reopen their economies and relax stay-at-home rules and business lockdowns.

These are tentative steps really, and not enough to truly move the needle. It’s going to take a lot more work to get the economy to resemble anything remotely close to normal.

Read:39 million Americans have applied for jobless benefits, but it appears just two-thirds are getting them

A new employment tracker by the workforce-management company Kronos helps to illustrate the depths of the decline.

As it happens, Kronos also makes digital time-clocks that workers use to check in and out of work at some 30,000 companies across the U.S. in fields such as manufacturing, retail and health care. 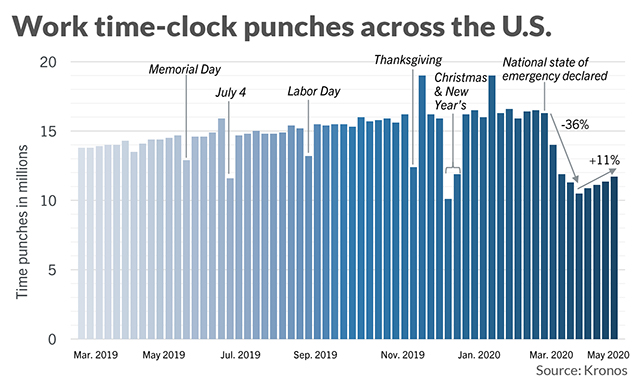 Since most American workers are still paid on an hourly basis, companies have to keep track. But they aren’t using those old fashioned paper punchers. In many cases workers are using mobile apps or the internet to record when they arrive and leave.

The newly compiled data from Kronos shows that basically an entire shift of work in a three-shift workday got wiped out during the first month of the pandemic. Time-punches sank a whopping 36%.

“This suggests people are starting to return to work as states open up, but they are not returning real quickly,” said Dave Gilbertson, vice president of HCM strategy and operations at Kronos.

Not every industry and not every region of the country has suffered the same.

Las Vegas was particularly hard hit as more than 90% of hourly employees tracked by Kronos were put out of work initially. Most work in casinos that thrive on millions of people visiting the state — millions who have vanished during the shutdowns.

Read:Bottoming out? Consumer sentiment improves in May due to massive federal aid

The health-care industry has been another surprise loser. All the focus on thwarting COVID-19 caused people to stop going to their doctors, dentists or hospitals for elective and even critical procedures. So many medical professionals have been laid off.

It comes as no surprise that the big cities in the East and West bore the brunt of the pandemic’s devastation. Concentrated populations that rely heavily on public transport have suffered the worst.

The South, where states are reopening more aggressively, has largely skirted the worst of the damage. Kronos found that shifts among retailer workers in Florida are almost back to normal — assuming the data is capturing the state as a whole.

“The South didn’t have the same kind of shutdown as the coasts,” Gilbertson said.

If there’s any good news, employees are returning back to work. But slowly. Time punches are still down 28% as of mid-April.

“The pace of recovery is going to be quite a bit slower than we hoped,” Gilbertson said.

Read: Why the U.S. economy’s recovery from the coronavirus is likely to be long and painful

Most economists think it will take years before the U.S. fully recovers. But the sooner the recovery begins the quicker the damage can begin to be reversed. Recent surveys of businesses and consumers, rising stock prices DJIA, +0.25% and reports like the one produced by Kronos suggest the U.S. might just very well be ready to start its long journey back.