Financial stocks bounced higher Thursday, sparked by a recovery in Wells Fargo & Co.’s stock off an 11-year low, as concerns about potential forced dividend cuts were put on hold despite a gloomy economic outlook.

The SPDR Financial Select Sector exchange-traded fund XLF, +1.40% surged 2.6% in afternoon trading, with 63 of 66 components trading higher, to put the ETF on track for the first gain this week after the ETF had lost 7.3% over the past three days. The ETF was down as much as 2.8% at its intraday low of $20.09 Thursday which was hit roughly a half-hour after the open.

The intraday rally was highlighted by Wells Fargo shares WFC, +6.21% , which ran up 8.8% to pace the ETF’s gainers. The stock had plunged 24.9% during a 10-day stretch in which it fell nine times, to close Wednesday at the lowest price since June 2009. It fell another 2.3% earlier Thursday to an intraday low of $22.02 before reversing course. 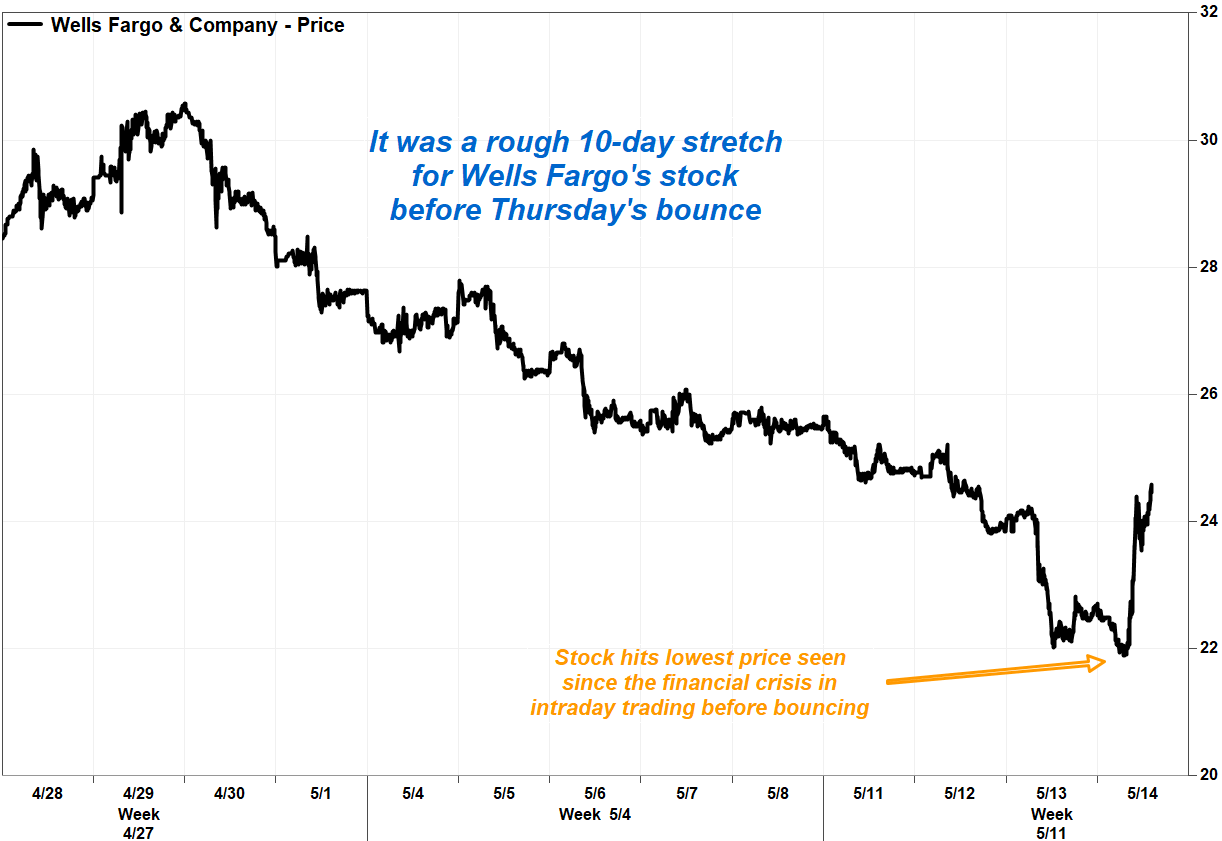 The stock, and the rest of the financial sector, was under pressure Wednesday after Federal Reserve Chairman Jerome Powell gave a somewhat downbeat assessment of the prospects of a post-COVID-19 economic recovery, and as Fed Vice Chairman Randal Quarles was questioned by Congress as to whether banks should be required to cut dividends.

Hovde Group analyst Joseph Fenech said he believed Quarles’ testimony this week suggested the prospects of forced dividend cuts “isn’t quite so far-fetched” and could have further support than previously presumed.

Don’t miss: There is a growing sense recovery will be slow, Fed’s Powell says.

European banks have cut dividends in response to the COVID-19 crisis. While U.S. banks have suspended stock repurchases, they have remained committed to paying dividends.

Analyst Vivek Juneja at J.P. Morgan indicated that concerns about a dividend cut has hit Wells Fargo particularly hard, “because it has the highest payout ratio” among the banks he covers.

Separately, Juneja threw cold water on speculation that a merger between Wells Fargo and Goldman Sachs Group Inc. GS, +0.25% may be in the works:

“In our view, this speculation is unfounded because: 1) any bank acquisition by Wells Fargo is banned by law as Wells already exceeds the 10% deposit market share limit; and 2) this deal would be blocked by Wells Fargo’s asset cap, which is already constraining growth.”

How Shell integrated FX algos into its corporate treasury…